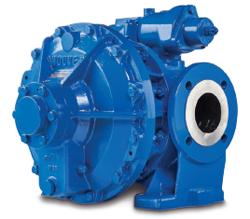 Mouvex Launches A55 Model & Celebrates 50 Years of A Series Pumps

Mouvex® is pleased to announce the addition of the new A55 model of its A Series Eccentric Disc Pumps. These pumps have been designed to replace existing Mouvex AR O pumps and are ideal for industrial applications involving both thin and viscous liquids. Thanks to its unique eccentric disc design, operational benefits of Mouvex A55 pumps include dry-run and self-priming capabilities with strong suction power, shear-sensitive operation, outstanding volumetric efficiency output not affected by viscosity variations and the ability to strip transfer lines.

Features and benefits of Mouvex A55 pumps include:

For more information about A55 model pumps, download the following marketing collateral:

Additionally, Mouvex is pleased to announce that is celebrating its 50th anniversary of manufacturing A Series pumps in 2015. Since 1965, A Series pumps have been manufactured, assembled and shipped from the PSG® Auxerre, France facility. Known for their reliability, durability and cost effectiveness, A Series pumps have earned a reputation as the ideal pumping technology for some of the harshest applications in the world.