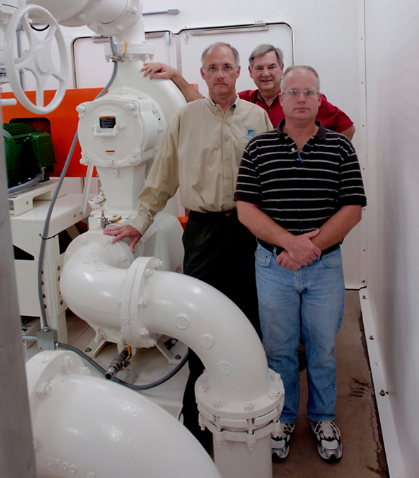 WCRSA maintains 300 miles of major sewer trunk lines and conducts operations through nine major wastewater treatment facilities located on three river basins; the Enoree, Reedy and Saluda rivers. For more than eight decades, WCRSA has been committed to protecting the public health and providing the necessary infrastructure to support economic growth in the state, despite the tightening of state and federal environmental regulations. Celebrating 80 years of environmental stewardship, WCRSA’s goals are to be a world-class organization and to have zero violations all while being dedicated to enhancing the quality of life in its service area by providing high quality wastewater treatment services.

But due to a population surge over the last 15-20 years – and to the age of one of the area’s oldest pump stations, WCRSA was challenged with the task of rebuilding the Tubbs Mountain Road #1 pump station. Originally installed in the 1960s, this particular pump station was operating at its maximum duty cycle and exhibiting telltale signs of aging. However, just prior to launching an overhaul for the pump station, WCRSA completed its participation in the EPA’s CMOM Program, whereby the Tubbs Mountain Road #1 site was identified as one of WCRSA’s top five repeat SSO (Sewer System Overflow) sites. As a result, WCRSA made a commitment to correct the problems associated with this SSO site within a two-year period – while maintaining operation of the site during the construction and rebuilding process, so as to minimize the community’s discomfort. “This process is very difficult – and can be very expensive,” attests Tony Walton, Collection System Manager for Western Carolina Regional Sewer Authority.“The one thing that makes this project specifically difficult is space,” shares Trent Bowles, Pump Station Supervisor with the Western Carolina Regional Sewer Authority. “We’re in a developed area, so we have a very small footprint that we have to work within. Currently, the site is very compact, but the redesign is putting even tighter restrictions on space. It’s a challenge.”

Rogers & Callcott, the planning firm charged with addressing the WCRSA challenge, originally drafted the new pump station design to incorporate two 7’ x 10’ Gorman-Rupp pump stations working within a larger footprint. However, as a new and smaller footprint was mandated, creativity was required to uncover new solutions.According to Rogers & Callcott, the Tubbs Mountain Road #1 pump station is also capacity limited by the facilities that receive its discharge. Therefore, the decision was made to reroute the force main to a remote destination, approximately two miles away – whereby WCRSA could discharge into a large gravity trunk sewer that would have no pumping facilities on it, rather than building a force main to its original discharge point. “The day that decision was made was a big day in western South Carolina. This new pump station, with the new design, has removed a load from a regional pump station – and that is an additional benefit to the sewer authority, shares Steve Bowen, a consultant with Rogers & Callcott.Proceeding with the plan, the team determined the yield and the delivery conditions that would be needed to achieve their desired result. Because of the area served by the pumps, the station took into account a yield of 800 gallons per minute to achieve a total dynamic head of 160’. A conventional, single pump was incapable of delivering this type of volume and pressure. The plan was drafted to incorporate two Super T Series® pumps, operating in a series, one right behind the other, in order to obtain the required head.However, midstream, Rogers & Callcott became aware of new pumping technology that could further maximize the new station’s efficiency and performance overall – up to 30% more capacity in fact than what the team was previously hoping to experience. “Regarding efficiency, by using the new Gorman-Rupp Ultra V Series® with UltraMate® pump technology, we’re now able to use a lot more of the horsepower for future capacity too – versus the previous design, which was really at the top of the 40 HP curve,” adds Barry Harms, P.E., of the Tencarva Machinery Company, the manufacturer’s representative that serves WCRSA. “That also cuts down on our size requirements for the onsite generator.”Being able to reduce the required footprint for WCRSA, while also freeing up space to allow for equipment to be better positioned for safer, more comfortable routine maintenance in the future – to clean the wet wells and things of that nature – was also key in the decision making process.