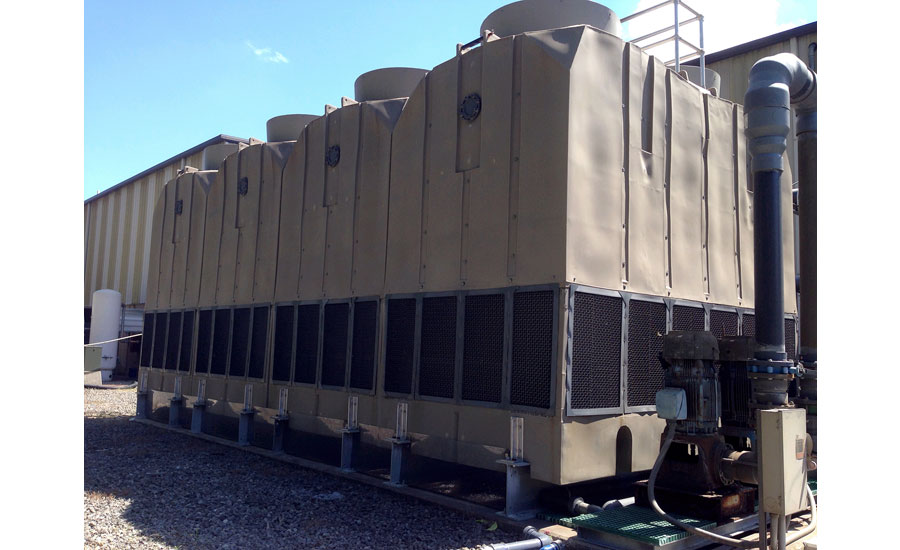 Cooling towers, used to reduce the heat of circulating water used to cool industrial processes and HVAC systems throughout the world, have undergone substantial design changes over the years. This is particularly noticeable with the introduction of HDPE (high-density polyethylene) cooling towers, which are recognized for providing longer service life with reduced maintenance requirements.

While these attributes are compelling, the idea of incorporating this technology to increase production capacity is, for many, an unexpected benefit of the HDPE cooling tower technology.

An example of this capacity benefit occurred when Tencarva Machinery was asked by Strand-Tech Martin, a leading manufacturer of prestressed concrete strand and high carbon wire, to evaluate a galvanized cooling tower that had required extensive service over its lifespan, and was beyond repair.

Tencarva Machinery is a distributor of liquid process equipment and custom engineered systems, most of which incorporate pumping packages and electrical controls. The company serves industrial and municipal markets in the Southeast.

“Our inspection made it clear that the existing cooling tower, a typical galvanized model, was beyond practical repair,” says Chad Plott, of Tencarva. Plott explains that the main problem was a destructive, corrosive effect on the metal-clad shell produced by salt air that permeates coastal areas such as Charleston SC, where Strand-Tech Martin’s manufacturing plant is located.

The process used by Strand-Tech to produce its PC strand wire and high-carbon wire products requires a cooling tower for the wire-drawing machines, which run at very high temperatures.

“They were barely getting enough cooling from the old tower, and really wanted a cooling tower that would allow them to expand the number of machines they run,” Plott adds.

When Plott was asked to make a recommendation for a replacement cooling tower, he suggested an HDPE type of tower manufactured by Delta Cooling Towers (deltacooling.com). HDPE engineered plastic cooling towers are designed to solve corrosion problems, which have plagued metal towers due to problems such as soft water, aggressive water treatment, and ambient factors such as salt air or caustic industrial gasses.

The design that Tencarva selected for the wire production facility was the TM Series, a modular cooling tower system that allows isolation of up to eight cooling cells for maximum operational flexibility. Plott recommended a four-cell configuration, which can produce up to 1,580 cooling tons.

Plott explains that one of the primary reasons for the customer’s inquiry into a new type of cooling tower was that because, in addition to structural damage, the old tower’s efficiency had fallen off. As a result, cooling capacity was only marginally sufficient for production, and the company was looking to increase production capacity significantly.

Plott says that since the new HDPE tower system was installed, in late 2014, it has provided an additional 30 percent cooling capacity, more than enough for the added production output his customer has required, and will likely meet additional production increases in the foreseeable future.

If yet more cooling capability had been needed, the modular design of the TM Series could easily have allowed doubling the capacity of the four-cell cooling tower that was recently commissioned via the installation of an eight-cell version.

In addition to solving the corrosion and cooling capacity problems, Plott says the new cooling tower technology has provided other significant benefits to his customer.

Among those is the 20-year standard warranty on the double-walled HDPE shell, which is a standard warranty on all Delta products. Also, the tower fans now come with direct-drive motors which relieves the maintenance and downtime issues commonly associated with belt-driven or gear reducer systems.

“This is the high bar among industry products,” Plott says. “And I think it attests to the longer life expectancy of the HDPE type of tower design.

Another built-in advantage is the cooling tower’s higher efficiency, including the fan drive system. It is composed direct drive fans staged, with two fans per cell. “This staged design means it’s not always necessary to run all of the fans continuously,” Plott says. “The payoff is a substantial savings on electric power consumption.”

The ease of installation of the four-module cooling tower was also an unexpected benefit. Because Delta products are pre-assembled at the factory, installation normally goes quickly and easily.

“As far as installation was concerned, nothing unexpected occurred,” Plott says. “Tencarva supplied the pumps and cooling tower, and the customer provided a contractor who performed the installation. Even with the modular design, installation was fairly easy to complete. The installers were able to use the existing footprint as well as use the same water storage area underneath the cooling tower mounting pad.”

Maintenance is another positive. Not only will the corrosion problem of the salt air become obviated, but also the simplicity of the direct-drive fan system will require minimal service.

In the end, the new solution will provide the best of both worlds, added production capacity with no maintenance headaches or downtime surprises.